From THE DEVIL AND PRESTON BLACK:

And digging deeper was pretty much what I was doing the day I found my LP misplaced behind Blizzard of Oz. On my way to return the record to the BLUEGRASS section the most beautiful woman I'd ever seen stepped out of the CLASSICAL stacks. She smiled. I smiled back. She asked what I had in my hand. On the cover a bunch of anonymous pickers sat in front of an old log cabin. The back of the record said Uncle Mason's Front Porch: Best of the Blackwater Sessions.
And on the track list, between "Pretty Polly" and "Hangman's Reel" was a song called "The Sad Ballad of Preston Black", written by E. Black.
I knew right then and there that if I could ever find the man who'd written that song, I'd have found my dad.

For me it's more about the date than the show. Tomorrow I'm celebrating my birthday in Bluegrass Country. All ready made my pilgrimage to Woodford Distillery. Dined on REAL KFC (and corn pudding and stewed tomatoes and mashed potatoes with white gravy....)

One of the things I love about bluegrass is the fluid interplay between musicians--banjo jumps from lead to rhythm as the mandolin takes over. The guitarist chucks along waiting for the nod that says it's his turn to take a lead. I like the organic way a song unfolds from a seed one of the players may have inadvertently dropped, almost as an aside. Just three or four notes that spark something in one of the other players who picks it up and runs with it. Bluegrass is about tragedy and love and heartbreak and cheeky humor. Here's a show to get you started. Best listened to with a nice glass of bourbon. 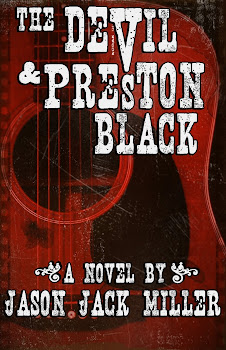 My birthday's this weekend, and since I can't invite you all to the party, I'm going to drop the price of my novel THE DEVIL AND PRESTON BLACK to .99 until the birthday weekend's done. Don't buy it for me, buy it because it's an awesome book.
1 comment:

From THE DEVIL AND PRESTON BLACK:

"Here's a quiet one for you all. But mostly, this one's for Stu."
I had notebooks full of songs and hadn't memorized a single lyric, title, or chord. Even though I'd be singing a lie, I leaned into the mic, closed my eyes and drew in all the breath I'd ever need. I whispered the first line to "Strawberry Fields Forever."
A few people clapped.
I ignored them. This song was too beautiful for this crowd, for this room. And as I sang, the true meaning of the song began to unfold like a map of the universe. I used to think Lennon meant that the people with their eyes closed just had to expand their consciousness or whatever, a metaphorical eye-opening. Start seeing with their hearts. But while I stood there, strumming somebody else's chords and thinking that Stu's departure meant the end to my time making music, I realized that my eyes had been closed.
And it wasn't that I couldn't understand the things I saw. The truth was I was only capable of seeing misunderstanding. I'll be doing covers forever.
Stu came out of the bathroom and stopped. I found his face and shut out everybody else's. I knew it was a dream, and he knew that I knew. But the words I sang were words I needed to hear. Maybe more than Stu needed to hear them. But if Stu and everybody else thought I sang to Stu I figured it was okay to go on letting them think that.
Nothing is real I kept telling myself. Because we never built anything real. Like maybe I should've been trying to make something of myself instead of worrying about what Pauly wanted. People clapped though. For the first time tonight somebody did something on this stage worth acknowledging. Stu pointed at me then saluted. If only he knew that I'd have done anything to keep him from putting that uniform back on.

Little Mike Rega told me that one of Sir George Martin's biggest regrets was releasing "Strawberry Fields Forever" and "Penny Lane" on a 45 instead of including them on SGT. PEPPER'S LONELY HEARTS CLUB BAND. Mike went on to say if he could ask Martin one question, it would be where he would've put the songs on the track list.

Taken from original CD, extracted by NeroMix, converted to flac by Nero Mix

A complete history of Strawberry Fields Forever, from demo to (nearly) final version. Two tracks have been removed as they exist in similar form on commercial release.

Full info can be found at http://www.bootlegzone.com/album.php?name=pb1008§ion=1
4 comments: