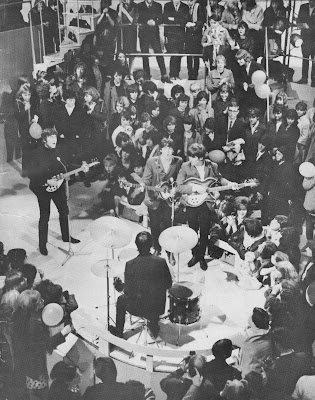 So I'm watching this Beatles vid from this day in 1964, and I'm trying to draw parallels to my own career. Which is stupid, because I'm not a Beatle. But I figure THIS is still their infancy. THIS is the band before the alternate personas and transcendental meditation.

I know, I know... These are The Beatles and you're just writing books about a guitar player and a woman who may or may not be the devil. But I love the idea of a young band, playing just to play. Smiling at the camera like nobody's watching. And that's how I write on a good day. Like nobody's reading. And that's why I'm going to continue to look at The Beatles as role models in 2014. And the haters can just keep hating.

I am the underdog. I realize that others are rooting for me to succeed, and I will gratefully accept their help when offered. I also understand the power of favors, and will offer them and grant them whenever I can.
-Seth Godin, THE BOOTSTRAPPER BIBLE

In my experience, a lot of writers feel like it's a little crass to sell yourself. I always thought this was silly for two big reasons:
Maybe it's crass that I'm not ashamed to admit it, I don't know. But I'm grateful for guys like Godin, who have done a lot of the heavy lifting when it comes to providing a framework for guys like me.

Read the rest, or download the PDF at SethGodin.com.
No comments:

You just need to click the link and provide some info. You can add additional comments if you'd like. Please take a minute to comment-- http://www.saveblackwater.org/action_easternlongearedbat.html

Of the six species of bats known to be impacted by this disease, the northern long-eared bat is among the hardest hit, dropping by a staggering 99 percent since symptoms of white-nose syndrome were first observed in 2006.  The U.S. Fish & Wildlife Service (FWS) is now considering protecting the northern long-eared bat under the Endangered Species Act, a needed action to begin to respond to this dramatic decline.

WNS has caused "the most precipitous wildlife decline in the past century in North America," according to biologists and has killed more than 5.7 million bats to date.  Thanks to all of you who have commented!  The FWS is accepting public comments on this proposal until December 3rd, please take action today.