Just in time for (the day after) Valentine's Day, here are Preston Black's Top Nine Duets!

#9 'Islands in the Stream' Kenny Rogers and Dolly Parton


From The Devil and Preston Black: My brother and me were pretty much forced to listen to whatever mom played in the car. Mostly country. Kenny and Dolly singing "Islands in the Stream."


#7 'Borne on the FM Waves of the Heart' Against Me! and Tegan Quin.

#6 'Fairytale of New York' The Pogues and Kirsty MacColl

From The Revelations of Preston Black: "Jackson" came through the shitty speakers first. I looked at Katy and smiled but she just rolled her eyes. I said, "You're hotter than a pepper sprout, you know that, my love?"


She smiled an acknowledgement. "Haven't heard that one yet."

Who'd you think I was going to put at #1? Alice Cooper? Whatevs.


From The Revelations of Preston Black: Ignoring the request, we played them our version of Arcade Fire's "Deep Blue" and finished the night with an abbreviated version of our setlist. Harmonizing with Katy on an a cappella "If I Fell" as an encore was my personal highlight. It was something we always practiced in the car—Katy doing the Paul part and me doing the John part—but never sang in public. The song had become our little secret, our way of telling each other that everything was going to be just fine. And after tonight, a little assurance was all we needed.

A man blocked my path to the door. The PO from yesterday. I stepped to the side to get around him as another man came in. When I saw the tattoo sleeves on his arms, blues and reds running together into a mass of blotches I knew it was the guy from last night. Up close I could see dried blood bumps and scabs formed over his ink. The only teeth he had left looked like the black licorice nubs from Good & Plentys.
"That your guitar in there?" he said. He got real close, and I took a step back, but he kept moving toward me. Close enough to see all his shitty tattoos.
He said, "I knew who you was the second I saw you. That Dago bitch told me you died same day your mother did. But I know flesh and blood. I know it." His breath smelled foul. Sulfurous and acidic. Matches and acetone.
On his forearm I saw a heart with an arrow through it. My mom's name was in the heart. Carlene July 16, 1966-September 1, 1983. The lettering looked like it'd been written in black Sharpie.
And right below it I saw an angel, and in the angel, the words Preston February 13, 1983-September 1, 1983.

It's a little hard to believe I began the first draft of The Devil and Preston Black way back in February 2008. The specifics are a little difficult to recall, but I know it was cold, probably snowy, and Heidi and I were at Panera. Besides the original drafts and notes, I can't say much about my headspace from back when I started The Sad Ballad of Preston Black, as it was called then, but I'm not surprised to see that the one thing that didn't really change a whole lot was my first line—I wish I could say I found that record the first time I walked into the place. (As I looked through my notes, I was very surprised to see that Danicka was pretty much an afterthought. "Need a shadowy devil figure in there.  Maybe the woman, his girlfriend?  She could be a good temptress.")

I knew I had to do a music book. Guitars, The Clash, amps and pedals and chords. I had to find a way to get two of my biggest passions together—like a Reese's Peanut Butter Cup with words. At the time, writing started to feel more like business and less like an urge. I'd spent a year querying Hellbender and kept getting the '…we don't know how to market it' rejections. Pretty frustrating stuff. Every writer knows the feeling. Musicians and artists know the feeling. Athletes know the feeling. Then it hit me—Preston needed to embody the conflict I felt with publishing and the frustrating fear that it'd never find its way into print.

Once I got that first chapter down, the story wrote itself. I stuck to my outline and decided The Devil and Preston Black wasn't for the agents.

This book was for me.

And since then, the book has become a lot more than a gift to myself and for that I am very grateful. In my mind, Preston symbolizes the struggle to create and to publish, and at the end of the day the book has come to represent the fulfillment I've found in some very unlikely places. The book has let me step into the magic of Nashville, Tennessee's Hatch Show Print, and it has allowed me to stand on stage with John Lennon and Duane Allman. Ultimately, it's given me some magical (and literal) glimpses behind the curtain (Thanks, Joe Streno! (scroll down to see the Strummer pic I'm talking about)) and in the end I received the contentment and satisfaction I'd always hoped for, but a thousand times over.

The book has been a way for me to meet and interact with thousands of people—both readers and people from within the publishing industry—who have overwhelmed me with their kindness and generosity. People from all over the U.S. and all the way over in the U.K. who have reviewed the book or have written let me know that the book has impacted them in some way.

So if you are one of these fine folks, you helped make this one hell of a trip. Remember Preston when you raise a glass this weekend because I'm going to be thinking of you.

PS: Before you start drinking, take a minute to check out Raw Dog Screaming Press's post on the same subject. (Thank you, Jennifer!)
2 comments: 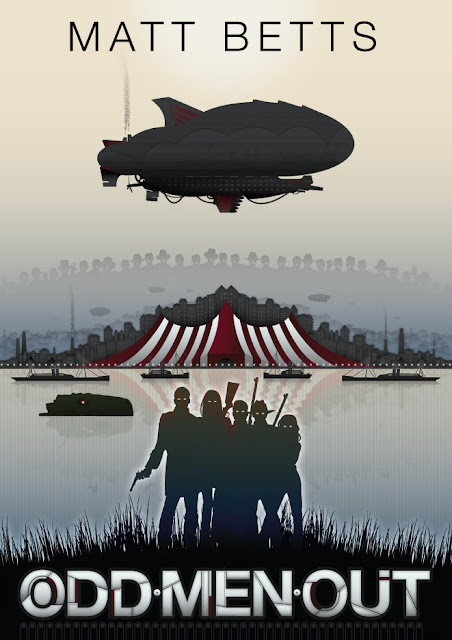 Fighting for survival in a post-Civil War America overrun by zombies, Cyrus and Lucinda join a military group called the Odd Men Out, and together they face a terrorist army from the North in a showdown over a weapon of enormous power.

Odd Men Out by Matt Betts