Giles Harvey, a former member of The New York Times Review of Books staff, wrote in that magazine:"Vladimir Nabokov referred to editors as 'pompous avuncular brutes.' T.S. Eliot said that many of them were just 'failed writers.' And Kingsley Amis, that laureate of cantankerousness, spoke of how the worst kind 'prowls through your copy like an overzealous gardener with a pruning hook, on the watch for any phrase he senses you were rather pleased with, preferably one that also clinches your argument and if possible is essential to the general drift of the surrounding passages.'"
No comments:

G IS FOR GENRE

Does genre fiction receive more respect now than it ever has?

See what I have to say about it over at Seton Hill Writers.
No comments:

Many Genres, One Craft: Lessons in Writing Popular Fiction is available for pre-order Many Genres, One Craft: Lessons in Writing Popular Fiction by Michael A Arnzen and Heidi Ruby Miller is now available for pre-order.

My articles "Painting Your Settings With Concrete Nouns" and "Magical Realism as Genre: Or Waiter, There's an Angel in my Soup" appear in the book along with a pair of sidebars I wrote. I was lucky enough to see an advanced copy and it's one of those books where you can flip to a random article and learn something.

It's an honor to have my work appear alongside that of some of the industry's finest genre writers--David Morrell, Gary Braunbeck, Tim Waggoner, Thomas F. Monteleone, Nancy Kress, Victoria Thompson, Mary SanGiovanni and Tess Gerritsen.

Finally! A book on writing category fiction, presented by those who do it every day. Choose a genre and jump right in. --Mike Resnick, Nebula and Hugo Award-winning author

Many Genres has everything you need to write and sell the book of your dreams. It is jam-packed with practical information, clear examples and brilliant insights, all delivered with clarity and wit. Skip the writers' conference and read this gem from the masters of genre fiction! --Suzanne Forster, New York Times bestselling author

'Speaking from experience, I can tell you there isn't a muse and if there is, she's already dating someone else.' If there isn't a muse, as you'll read in this invaluable book for writers, MANY GENRES ONE CRAFT is surely the next best thing. No matter what you want to learn--from choosing the point of view for a scene, from getting the most out of a critique group to fine-tuning your final draft, from approaching a literary agent to promoting your published book in print or electronically or both--it's all there. The contributors know their stuff, and what they're teaching applies to writing at any age. MANY GENRES ONE CRAFT covers all the bases superbly, including issues I haven't seen addressed anywhere else in today's rapidly shifting publishing landscape. --Renni Browne, co-author of SELF-EDITING FOR FICTION WRITERS
No comments:

THE DEVIL AND PRESTON BLACK featured over at Indie eBook 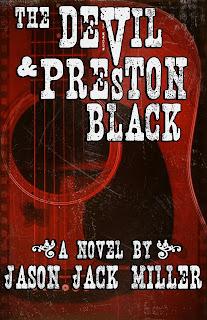 I remember coming into my dad's apartment after a day on the Cheat River in West Virginia. My memory might be playing tricks, but it's seems like this was on as soon as I turned on the TV. In hindsight, I suppose this is the kind of thing MTV would play every 15 minutes.

In my previous post I talked about a guy who struggled and eventually regained control of his soul. Kurt's a guy who lost that battle.

Comment: This has some digital noise in a few songs from the DAT.
DAT generation is most likely a DAT(3) or a DAT(4).
This is a vast sound improvement from the existing ANA(1),
but it suffers from the same cuts so it's virtually the same edit.
The biggest difference other than sound that's noteworthy is a complete "Even In His Youth."

Encoded by BS
Do not sell or encode to MP3!

THE MUSIC AND PRESTON BLACK The Beatles, Acoustic Submarine

I think soul is what moves Earth's 4.5 billion tiny little sparks through the universe. Soul gave us "Shall I compare thee to a summer's day..." and "If there's a bustle in your hedgerow....' Soul is why we distillers wait seven years for good bourbon.

Maybe soul, or a soul, is one of those things you don't notice until it's gone. That's kind of what happens to Preston Black in my novel. One day he wakes up, and life as he knows it is gone forever. His means of making music are taken from him by external forces. Without his old routine he's forced to make a change to pursue his passion or lose it.

Who better to guide Preston toward his grail than John Lennon, a man who seemed to spend the last ten years of his life searching for his own soul. Only recently have I started to see early John Lennon and late John Lennon as two totally separate entities. India is probably where the split began. John hooked up with Yoko just after returning to England. She was in the studio with him for most of The White Album sessions. Prior to Yoko he'd never had to choose. The Beatles were his soul.

During their time in Rishikesh with the Maharishi, The Beatles worked on thirty songs. Some were completed in India, some, like "Mean Mr. Mustard" and "Something" remained unfinished until the sessions for Abbey Road in 1969. Some, like "What's the New Mary Jane?" never appeared on any official releases. "Child of Nature" was reworked by Lennon as "Jealous Guy" and included on the album Imagine.

Most of what remained showed up on The Beatles, a.k.a. The White Album. (A month from now a purist is going to leave the comment, 'Um, there's no such album as The White Album. Did you mean...') In order of appearance, the India songs on The White Album are: Back in the U.S.S.R., Dear Prudence, Ob-La-Di, Ob-La-Da, Wild Honey Pie, The Continuing Story of Bungalow Bill, I'm So Tired, Blackbird, Rocky Raccoon, Why Don't We Do It in the Road?, I Will, Julia, Yer Blues, Mother Nature's Son, Everybody's Got Something to Hide Except Me and My Monkey, Sexy Sadie, Revolution, and Cry Baby Cry. Demos of these songs recorded at George Harrison's estate just after everybody returned from England, and show up on a bootleg called the Esher Demos or the Esher Tapes. The White Album songs on this bootleg come from those sessions.

To me, the songs from India represent the last drop of life The Beatles were able to squeeze out of their collective soul.

Here's the recording info from Sugarmegs:

Disc 1:
Do You Want to Know a Secret
And I Love Her
I'm a Loser
Help
Yesterday
Yes It Is
Norwegian Wood
I'm Looking Through You
We Can Work It Out
I'm Only Sleeping
Yellow Submarine
A Day in the Life
The Fool on the Hill
Christmas Time is Here Again
The Happy Rishikesh Song
Jubilee
Child of Nature
Goodbye
Everyone Had a Hard Year
What's the New May Jane

Disc 2:
Heather
Back in the USSR
Dear Prudence
Ob-La-Di Ob-La-Da
While My Guitar Gently Weeps
Blackbird
Rocky Raccoon
Julia
Mother Nature's Son
Hey Jude
Because
I Lost My Little Girl
Teddy Boy
Mama, You've Been on My Mind
For You Blue
Two of Us
Across the Universe
I Me Mine
Maggie Mae
No comments: