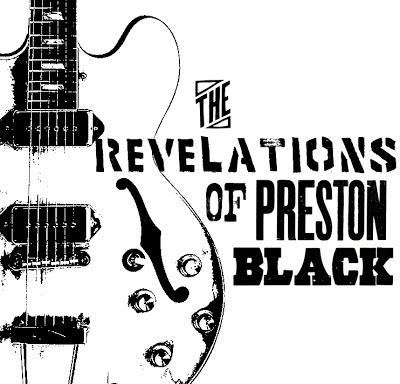 Sir John Edward of Lawson infected me (like I always knew he would,) and now it's my turn to spread the disease. Basically, it involves searching for the first  use of the word “look” in your work in progress, then pasting that paragraph, and those immediately before and after, into a blog post, after which you spread the disease to five other authors.

This is from the very, very beginning of THE REVELATIONS OF PRESTON BLACK, a little alt newspaper article about an upcoming show. Kind of tells us a little about Katy and Preston since last we saw them.

From the moment she walks across that stage, you know Katy Stefanic is the kind of girl you could fall in love with. Though romantically involved but not married, the pair play off of each other like they have been attached at the hip for no less than twenty years, instantaneously responding to frequent and impulsive key and tempo changes. Call me jaded, but watching Stefanic and Black work the aural space over the crowd mesmerized me in a way only more seasoned acts have been able to do in recent years. Except for the random, "Marry me, Katy," (or, "Call me, Preston,") the crowd remains stone silent during ballads and quiet instrumentals. Even more curious is the way audience responds to the mix of old time throw-down melodies and punk-fast tempos with fists in the air and good old-fashioned foot stomping. And when the lights came up for the first encore the frenzied crowd responded like Joe Strummer himself  was going to join them for a song or two.
I had a chance to talk to Stefanic and Black after their show in D.C. last Saturday and asked them about their relationship and how it affected their musical development. Preston was more than content to let his beloved Katy do most of the talking. With a wide smile, she folded her  hands over her knee and explained, "Sharing music with somebody is a lot like sharing a bed. After a while you start to know when something's building, when things are going to sour, when the temperature's going to change with just a look."
Preston added, "It's like yinz and y'all. Same language, just different ways of saying things. What the audience hears is where we meet in the middle."