THE MAGIC OF FELLENGREY: Guest post by Scott Thomas.

Today I'm very happy to have Scott Thomas talk about magic as he sees it. I'll give you a hint--it isn't that fantasy you're used to. --Jason 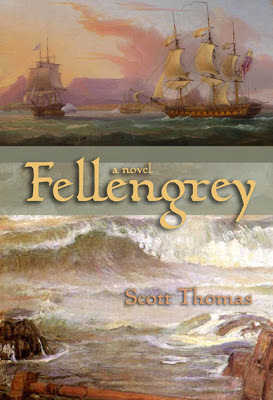 Magic, in the fantastical setting of my novel FELLENGREY, could quite easily be likened to fire. It’s purely natural, for instance, and one could speculate that it exists as something of an element alongside the four that we are accustomed to. Similar to fire, this force, or whatever you would term it, can be a good thing or a bad thing, just as flame can either scorch you or keep you warm against bitter cold. It depends on particulars. But magic, on and about the two kidney-shaped islands that constitute the fictional 18th Century world of Fellengrey, sometimes acts as if it has a mind of its own, an unpredictable, untethered mind, like lightning imbued with the capacity to choose where it strikes. A sensible soul would regard such powers with a certain respect, if not a measure of dread depending on the circumstances.

Each island was burdened with some sort of undesirable magic. To step foot on Cat Milk's Lapse, for example, was to risk having one's mind become precisely like that of a feline, which may in fact have been an improvement in some. Broken Mast not only boasted the rockiest shore of the bunch, but offered the singular disease known as mirror blisters, the symptoms of which were chestnut-sized welts that looked to be scrunched versions of the face of the person they appeared on.
And, of course there was Small Island, where a man could only remain for thirteen hours before shrinking to the size of a child. Once afflicted with “the shrink,” an inhabitant could only be off the island for thirteen hours, or suffer certain death.

Hale Privet, the hero of this adventure, holds to a healthy wariness when it comes to interacting with magic, though the locals commonly involve themselves with it. For them mystical forces are a resource, something to call on, something to shape and program and apply in the form of spells and charms that are used for everything from healing and bringing about sleep to matters of the heart. Love spells are particularly popular in certain parts of Fellengrey. But magic is married to mystery, and not even those familiar with it fully understand it or even the forms in which it presents itself in their world, whether the manifestation is amorphous or as tangible as a stone or an animal.

The bird was an up-dead, a small, unremarkable thing of brown, no bigger than a sparrow. For reasons unknown up-deads upon dying floated up into the sky, up and up and up until lost from site, never to be seen again decomposed or otherwise.

Natives of  Fellengrey don’t, for the most part, stop to contemplate the origin of magic; it is a natural part of their world, as common as changing seasons and the rhythm of the tides. Like the tides, it sometimes harkens to astronomical influences.

“Ahh, a curse falls on money taken with blood, and one must wait the new moon for the magic stain to pass.”

There is no “supernatural” in Fellengrey. Ghosts and spells and the unexplainable come from the same box of colors that paints the clouds and fireflies, and often strange forces make a home of palpable items like moss or sea shells or islands or in skulls that turn into fists of wind or a tree with the power to heal wounds caused by bladed instruments.

So, it stands to reason that magic is woven through the Fellengrey seasons. Notable is an annual event that comes on the heels of the harvest.

This was Ghost Hasten, the most dreaded day of the year, when the souls of the angry dead were free to dash across the earth and wreak havoc on the living. Preparations -- like hanging wreaths of brittlethorn to discourage chimney visitations -- had been going on in the village for days. Coveted silver nails, which, generally speaking, were the most expensive articles that local planters were apt to own (and kept for this express purpose) were scattered about the front door stoop. It was a well-known fact that cruel ghosts hated silver. A rusty iron spike poked up from the outer sill of every window and upon these had been impaled apples, crudely carved with the features of a skull.

It would be unfair to focus entirely on the ominous and treacherous aspects of Fellengrey magic. Remember it’s like fire, which can dance and is mesmerizingly bright. Magic is suited to and even enhances the rugged green and gray beauty of the islands known as Fellengrey, and it is infused into the vernacular traditions there, the rich lore that is firmly rooted in the splendidly inexplicable.

Legend held that the sun darkened and died one terrible winter’s dusk, and a little girl, seeing her family’s despair, snuck out into the night snow and prayed until she froze to death. Hearing her prayers, and seeing her sacrifice, half the bees of the world flew up into the dark sky and joined in a great circle amongst the cold stars. The summer heat within them turned them into a great ball of fire...a new sun was born.

I am not spoiling anything here by disclosing that the source of Fellengrey’s magic is never divulged in the book. The topic is never explored. We might just suppose that the numinous forces there have always been around, that they joined the wind and sea in shaping the twin islands, that they’ve been in the air as long as there’s been rain, and that they’re older than the stones of the craggy coast. Readers are welcome to speculate, of course, but the book holds onto the secrets behind Fellengrey magic, only allowing us to see that its dual aspects of menace and beauty waltz so closely together that at times they seem to be a single dancer.

Purchase the hardcover or paperback editions at Amazon.
Through Raw Dog Screaming Press.

Get the ebook for Kindle, Nook and other readers exclusively through reKiosk.