THE SEVENTH EQUINOX by Matthew Warner will debut on November 6th but the pre-order starts today and we're celebrating with the reveal of the book trailer:

“The best part of Warner’s easy-paced, almost pastoral tale is the friction between Bessie’s attraction to Robin, her longing to believe in magic, and her fear of trusting again—all of which run deep. This is a world-shattering crisis acted out in small scale, with a subtle appeal to romantic fantasy.” 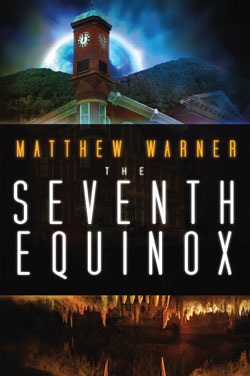 From the Back:
Her recent divorce left Bessie Henderson on guard against being exploited by any man. When she escapes to Augusta, Virginia, she’s captivated by the small town’s charm, but also its quirks: her intrusive elderly neighbor, the secret labyrinth of caverns beneath her Victorian house — and the man hiding from the law in her root cellar.

But Robin Goodfellow is not just a criminal. He’s a fertility demigod called the Hunter. He’s been injured, and he needs Bessie’s life force to survive. By the spring equinox, he must complete the grand Hunt, an ancient ritual of environmental renewal, or the planet will slowly die.
As the equinox nears, the couple must reconcile their growing feelings for each other. Bessie may not be ready to trust and give to another man, especially one who takes so much from her. And Robin must choose between love and duty — a duty that means life for the planet but death for himself.


About the Author:
Matthew Warner’s publishing credits span a variety of formats, although readers mostly know him through his horror novels and short stories. Dramatic works include films from Darkstone Entertainment based on his screenplays, plus a radio play and stage play premiered by theaters in central Virginia. Warner lives with his wife, the artist Deena Warner, and sons, Owen and Thomas. Readers can visit him at matthewwarner.com.