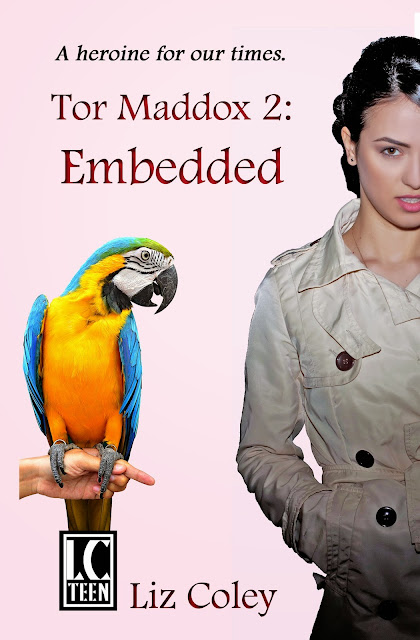 Life has been way too quiet for Tor Maddox since her fifteen minutes of CNN fame. Then agent-in-training Rick Turner reappears with what sounds like a simple assignment—to embed herself as his eyes and ears in her own high school. When she agrees to keep tabs on high school state swim champ Hamilton Parker for the Feds, she is plunged into the deep end of a sinister plot. Knowing that freedom, justice, and lives are at stake again, Tor jumps in feet first, but has she gotten in over her head this time?

When observe and report becomes kiss and tell, Tor’s first mission may blow up in her face.

Liz Coley has been writing long and short fiction for teens and adults for more than ten years. Her short fiction has appeared in Cosmos Magazine and several speculative fiction anthologies: The Last Man, More Scary Kisses, Strange Worlds, Flights of Fiction and Winter's Regret.

In 2013, psychological thriller Pretty Girl-13 was released by HarperCollins in the US and UK. Foreign translations have been published in French, Spanish, German, Portuguese, Swedish, Norwegian, Russian, Czech, Slovakian, and Chinese (simplified and traditional).

Her independent publications include alternate history/time travel/romance Out of Xibalba and teen thrillers in the new Tor Maddox series.

Liz lives in Ohio, where she is surrounded by a fantastic community of writers, beaten regularly by better tennis players, uplifted by her choir, supported by her husband, teased by her teenaged daughter, cheered from afar by her two older sons, and adorned with hair by her cats Tiger, Pippin, and Merry.