Excerpt from ZEN AND THE ART OF ARNZEN, a.k.a What is the sound of one dog dying? 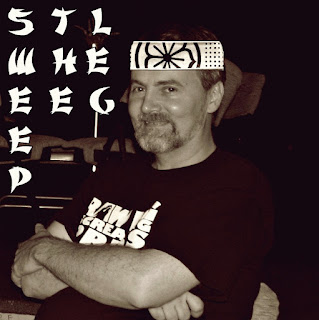 I probably shouldn't be sharing these 'rules,' which were only revealed to us after years of patient study at the master's feet. Like, waaay longer than it took Daniel-son to learn that crane kick from 宮城成義 even. (Mr. Miyagi to those of you who don't read kanji.) (If it upsets you to learn that 'sweep the leg' isn't one of the rules you should stop reading now.)

And maybe these aren't really 'writing' rules as much as they are 'writer' rules. Like I'm not sure a single one of them made me a better writer, but a few of them have gotten me through some tough times as a writer. When you look at the rules in that context they make more sense.

And here's the rub--you can look at these five rules and believe that simply observing them will endow you with the power to overcome whatever obstacle beseeches you, whether it be writing really, REALLY short fiction, or swearing off beef for the rest of your life. But you'd be wrong. Like when Daniel-son thought he could hook up with Elizabeth Shue without pissing off Johnny (in that awesome skeleton costume, nonetheless!) Wronger than that. 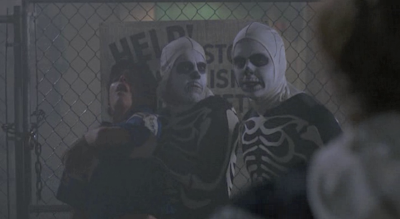 You have to practice! You have to learn to always be in the 'writer' frame of mind, not just when you crack open your story to bang out another thousand words. Because writing is a lifestyle. It doesn't take a vacation.

I can't remember exactly when the lessons started (that's what's Zen's all about, yo,) but Heidi says it went something like this:

So after that we both kind of gave up, and then he hit us with them:

Nobody wins a thousand bucks a week for life on their first scratch-off, so you should know better than to expect your first novel to be a smash runaway success. There are millions of people out there who have written one novel. And this is an entirely un-scientific guesstimate, but I'd say that there are far less out there who have written two.  So see what I just did there? You increased your odds a bunch.

Besides, if you want to write, you're going to do it because you love it first and foremost.

(Inner voice: For real? That's what you're going with?)

"Who the hell's J.K. Rowling? She's never been to BlankCon."

Yeah, and she didn't listen to genre 'rules' or get bogged down in the minutiae of Wormhole vs. FTL debates.

Here's a little story about being an 'insider'--back in the summer of 2005 I heard an agent at a writing conference proudly declare that '...the vampire novel is dead.' Now, I never really had an interest in vampires after BUFFY, but there may have been a hundred writers there who did. A hundred writers who took that 'insider' information to heart, went home and scrapped their manuscripts.

But you know who wasn't at that conference (probably?) Stephenie Meyer, that's who. She was too pumped up about her impending vampire novel's October 5, 2005 release. (Yeah, I invoked SM, so what? Do I wish I would've written Twilight? No. Is she an example of an outsider who bypassed all of the little 'rules' and genre mores? Duh.)

Is anybody saying to stay away from conferences, conventions, writing programs? Not at all. Just think like an outsider. Be wary of the traps.

Because a year's too long for a resolution. I mean, the rule has the word 'focus' built right into it. Pick two or three words and recite them habitually (and silently.) It's about positive thinking, like THE SECRET but free. Then when the world gets you down, and your brain is telling you that you'll never finish a novel or make it as a writer, you fall back on your focus words and you're all set.

Unless you choose 'despair' or 'suffocating' as focus words. Because then you're just 'screwed.' 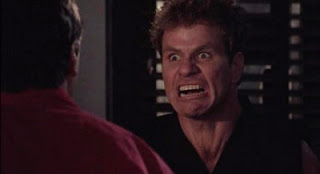 Kreese from THE KARATE KID said, "We do not train to be merciful here. Mercy is for the weak. Here, in the streets, in competition: A man confronts you, he is the enemy. An enemy deserves no mercy."

Dr. Arnzen probably didn't mean it this way, but that's the Zen of it all. "Make who cry? Readers? The Competition? My mom?" (True story, my mom doesn't understand my book because she missed all of the subtle plot points I buried carefully within my well-crafted sex scenes.)

Maybe you, as the writer, are meant to cry a little every now and then. I know I do. Like right now, in fact.

Rule #5 BE A CONTRARIAN.

But in the context of the rule, my reply was as contrarian as it was apathetic, right?

(Inner voice: "But it doesn't come off like that.")

Okay, I see what you're doing there.

(Inner voice: "I'm not doing anything. Unless using directed questions to get you to reconsider your responses counts?")

Yeah, okay. Neither the flag nor the wind moves, right? Only the mind moves.

I'm not sure what #5 is about, but we were stuck at four for the longest time. So omit it, if you want.

There are more rules, but you have to earn them like we did. You have to go down to the beach day after day and wash Arnzen's cars. Than, and only then, will you be able to catch flies with chopsticks.

Supports this Michael A. Arnzen's Fridge of the Damned!

And check out the always awesome Raw Dog Screaming Press while you're at it.