THE MUSIC AND PRESTON BLACK Rubycide! 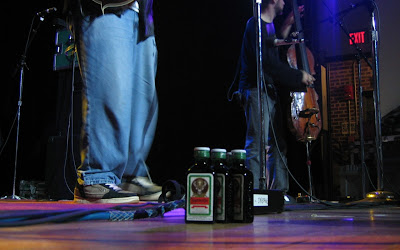 So, this is going to be a little thing where I talk about the music from the world of THE DEVIL AND PRESTON BLACK. You could call it a series, but that would imply a regularity that I won't guarantee and a sense of professionalism that I may be incapable of. So let's just say a new THE MUSIC AND PRESTON BLACK will pop into your Twitter feed and onto your Facebook wall every now and then. It'll be like a tick, you may not even notice it then BAM! you got yourself some Lyme Disease.

And when these posts do pop up, I suggest you grab those earbuds and jam them deep into your favorite earholes because I ain't putting forth any crap here. This is all going to 100% rocket-fueled noise from as close to the source as possible (soundboards, soundboard matrices, FM broadcasts, etc.) so your brain doesn't lose a single note.

Here's how this will work. At the top of the post I'll talk about the band and the song, maybe the venue or circumstances surrounding the show or recording, if any.

Then I'll give you a link, just like this so you can listen along. Like Picture Pages with Bill Cosby back in the day.

YMSB is a Colorado-based bluegrass band known for their live shows. Four phenomenal musicians cover a variety of material from traditional Stanley Brothers tunes to modern stuff like The Misfits' TWENTY EYES, Pink Floyd's DOGS, Talking Heads' GIRLFRIEND IS BETTER. They also pick songs from an extensive repertoire of originals. But for somebody unfamiliar with the band I think the covers are the gateway drug.

RUBYCIDE is a blend of a cover and an original, sharing a common thread--extra points if you can guess what that thread is. I chose this version because it's fairly self contained. The > in the description above indicates a segue from one song into the next. Jeff Austin's voice can be a little hard to take at times, but when he's on, like he his here, it fits the tune like maple syrup fits a pancake. What I really like though, and what elevates this song into 'epic' territory is the way the minor key drone of the banjo in the space between verses drives the song deeper and deeper, so when the body hits the water you knew all along it was coming. The frantic pace of the staccato mandolin and call and response of '...follow me down (to the riverside) follow me down (to the bubblin'bubblin') follow me down...' is Joey Ramone for 1939.

RUBY is an old Osborne Brothers tune that's about as Appalachian as yew pines and coal mines. Of course, somebody dies. (Or has just died.) The song's so dirty you want to wash your hands when it's over.

Ruby? Ruby? Honey are you mad at your man?

I sit here in the shade I shovel with the spade,
I'm diggin' in the ground's cold mine.
Oh Ruby Ruby honey are you mad at your man?

I've done all I can do to tag along with you,
Still you're not satisfied.
Oh Ruby Ruby honey are you mad at your man?

If you don't believe I'm right just call on me tonight,
I'll take you to my shady so cold.
Oh Ruby Ruby honey are you mad at your man?

Some pretty heavy stuff from a guy who plays an instrument with only five strings, right? Just wait. Yonder tacks RUBY onto their own FOLLOW ME DOWN TO THE RIVERSIDE.

...said I will take you by your hand,
lead yo' ass down to the banks of the sand.
I'll ask you one more time,
hey, sweet honey lover are you gonna be mine?
If the answer is no, well sorry honey, down, down, down, you must go...

Rivers and dead bodies. That's how I like my tragedies.

Listen to or download the whole show here. Highlights for me include the originals NOT FAR AWAY (There's a deep, dark hole in the mountain, where the devil sleeps all the time...) and ANOTHER DAY, an Adam Aijala number that shows the band's lighter side, a pair of story songs-SOMETIMES I'VE WON and DAWN'S EARLY LIGHT and the TROUBLED MIND>TWENTY EYES>TROUBLED MIND triptych.

Encore:
Damned If The Right One Didn't Go Wrong
Half Moon Rising